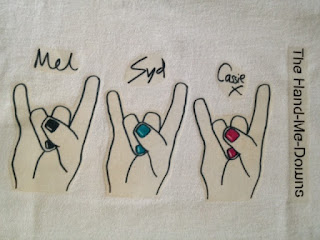 I am doing a Design module at the moment as part of my degree.  My assignment I sent in today was to design a t-shirt, a really interesting and involved process.  My final design ended up being a t-shirt for a fictional pop punk girl band called The Hand-Me-Downs!  I spent a bit too much time deciding the names of the band members and what they might play, so tonight I have put together a playlist of what they might rock out to at their gigs. 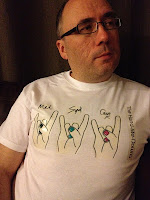 He is gonna love this theme, he loves these types of bands.  I am cooking as well (I know!) as he is getting drunken at a racing day up at Newbury Racecourse.

What the heck do a bunch of girls in a band eat??  This will be challenging.

Music: Spotify playlist.  Beginning with a band that I had playing when I was doing this design, Spacemaid, moving via the Veronicas, 7 Year Bitch, Bikini Kill and X-ray Spex.  Yeahhhhhh! 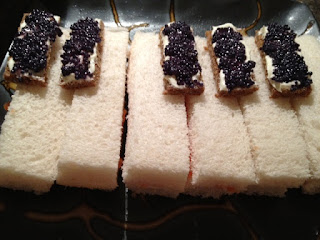 I used a Pinterest board to inspire me.  Lots of treble clefs and pianos.  I liked the simplicity of this choice.  My sandwiches were posh ones, cream cheese and salmon, with the ones on top as rye bread toped with creme fraiche and caviar.  Not food for a band, but, you know, keyboard, so...

He liked this, thought it was visually awesome, and satisfying after his endless drinking all day and winning on the races! 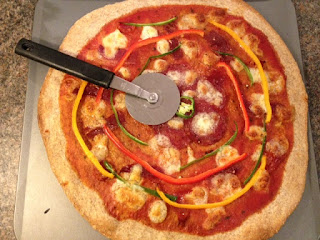 
Well, so, a pizza is round and so is a record.  That was as far as my thinking went.  Thought pizza would also be the kind of thing a group of girls would scoff before a gig.

It doesn't massively look like a record, but I am okay with that.  Nom.

Pizza was okay.  Lessons learnt - I think if I par-baked (if that's even a thing) the crust for a bit first and then did the toppings that would be better.  I had also gone wholemeal on the flour, but I think that was a good idea.  Def needed more toppings and cheese, I was a bit afraid as these make homemade pizzas soggy and a disaster.  Next time be brave! 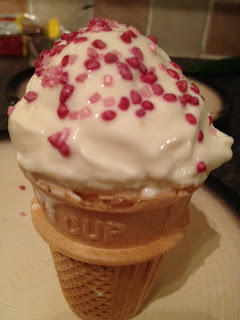 Inspired by Pinterest again.  Don't think this came out brilliantly as an ode to a microphone, but it was lovely.  Cool cones.

I put Russian Fudge yoghurt (I know!) in the ice cream maker and this was superb.  And sprinkles, yeah.  Needs a revisit.

And music conclusion.  He thinks that Paramore, Avril Lavigne and Reachback were all too polished.  He thinks The Hand-Me-Downs would be more like Sioux and The Banshees and The Veronicas.  Interesting.