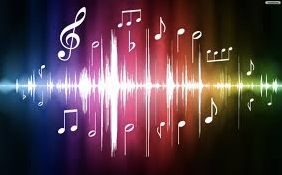 My friend Piia introduced me some time ago to the Music Game concept.  A group of people bring n songs each to a gathering - the songs should be something new, interesting and unlikely to have been listened to before by the others.  Each one is played in full, and the others write down what they think, who the artist might be and a score out of ten, then discuss, then onto the next person.  Yes, a way to make listening to music feel like work :-)

The reason why this is great fun, is because you're doing a blind tasting, um listening, so if you think you love or hate such and such a band you would have a prejudice before the song starts.  This gives it a frisson of unknown and you're more likely to follow up the artist and see what else you might like by them.

An extra rule is that we try to add things in that are a bit out there, or that we're not even sure we like ourselves.  And we definitely don't pander to the other person even though it might be their fave song ever.

So we'll do the same with the food - things we haven't made before (two courses each) eaten in absolute silence as per the rules so as not to give away enjoyment levels. Well, heh, not really.  But we get to grade everything tonight, so red pens at the ready.

Music: Spotify playlist.  We're alternating his song, then mine, then his etc etc.  Usually we need to come up with a maximum of ten for this game, but we have given ourselves a challenge of thirty.  Thirty hidden gems the other person hasn't heard of - madness.  Not Madness though.  I spent several hours researching my saved songs on Spotify, my Shazam tagged list, the NME Spotify app, the freakin' internet... and people in the street.  Well, not really, the people of this village would probably recommend Michael Buble (she said, very snobbily). 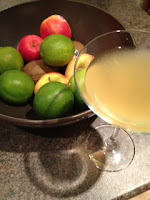 I find the lime juice overpowers the rum, which is a shame.  I would like a revist, but with a more rummey emphasis.  My grade is 7/10 and he gives it 6/10.

As we finish off this drink, and he prepares the starter, he lays into the Ramones and how insipid they are.  He is amusing. 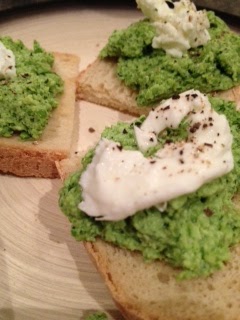 We both quite like it.  I feel like there's something not quite perfect about it.  He thinks it would be better with ingredients right out of the garden.  It does feel full of vitamins and good for you, but not in a preachey way.  Mint isn't overpowering either.  I give it 6/10 and he gives it 6.5/10.  He thinks it isn't bad but could benefit with tweaking, i.e. more lemon juice to pep it up.  He says he feels virtuous eating it!  Wouldn't be unhappy getting that in a restaurant.  Luckily lots of leftovers, so will be great to have an encore. 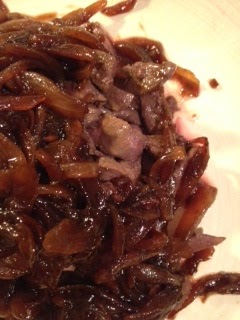 Lambs Liver with Melted Onions and Marsala with Bubble and Squeak

A nice Delia recipe.  Very dull to stir onions for ten minutes.  It's endlessly long.  All shops were useless on the calves' livers front, so we're going with lamb.  I don't know what difference there is.

He said he was apprehensive (childhood memories of overcooking) but he liked.  The liver only needs about one minute of cooking.

I found the sauce really very good, but for me it didn't mesh with the liver.  It was so rich and felt like a weird juxtaposition.  Would like a do-over for both components, maybe in a different guise each.

Bubble and squeak (with brussel sprouts instead of cabbage, although they kinda are mini cabbages) worked well.  It's quite, well, bland, which worked well.  He gives it 7/10 and I concur. 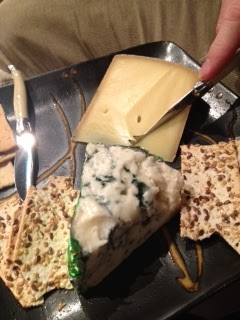 He chose some blue cheese for me and asked for a statement blue cheese.  It did stand out!  Even if the sales girl said it's only good in salads.  She needs to go on a training course.

He did some tasting of others we haven't had and he settled on the Apenzeller.  He gives the cheese course a 7/10 and I think I do too, the Apenzeller was just a tad too dull, could have knocked me higher with a little bit more pizazz. 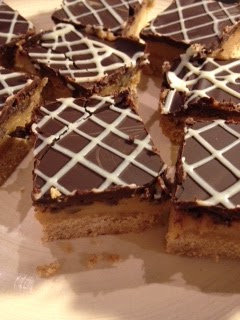 A Nigella recipe (apparently).  A dessert I love and have wanted to make forever.

The hardcore plain chocolate made it more grown up - he loved this.  He thinks it's a very good counter to the rest of the sweetness of the dessert.  I had also run out of plain flour and used wholemeal instead and I think this worked really well, more body and texture.  Could maybe have done with a little less.  I had it in the fridge and that wasn't the right place for the darn things.  He gives it 7.5/10 and I give it a 7/10.

Many songs later, and an excel spreadsheet of scores... the favoured song was Next to Argyle - Scissors for Lefty which weirdly I heard and liked on the end credits of a Lindsay Lohan film.
Posted by Unknown at 22:12