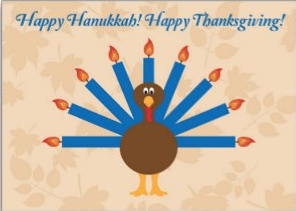 Last night was both Thanksgiving (US) and the first day of Hanukkah.  Apparently they won't overlap again until 2070.  So I am sure we'll celebrate then too.

I don't know much about Jewish traditions, only odd things like you shouldn't have lasagne as it has both meat and dairy (they can have tuna lasagne which sounds delish anyway).


Music: Spotify playlist.  I didn't really fancy listening to some Jewish religious music, so found some cute gems (including the the South Park tune) and then the top 30 Jewish artists who seem to be mostly American. 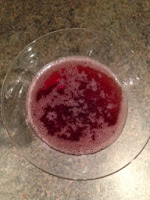 A classic, American to its core.  Nom. 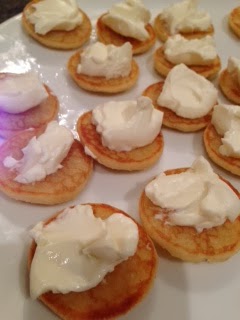 Wow, I wish I could share a recipe with you.  But it's so simple it doesn't exist.  Get a blini, heat it, dollop cream cheese on top.

Am used to blinis with sour cream, but this ain't shabby.  My critical self would like some sort of foofery on top of them, a sprinkling of chives, perhaps. 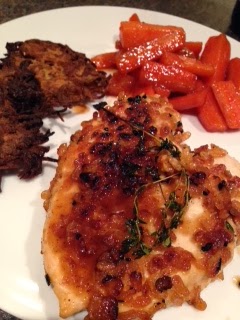 Apparently a Jewish dish.  I watched in bewilderment as he coated the chicken in the Rice Crispies coating.  They sort of (apologies) looked like chicken breasts covered in maggots, before they were cooked up.

And they were delicious.  Savoury taste and not crunchy after cooking.  Worth another go; could be pretty good as a popcorn chicken version.

The carrots were sweet and nice and felt quite Christmassy - I think he wants to have another go with them over the break.  No complaints here.

The latkes were fab, he was disappointed they were a bit overcooked.  I could eat a stack of these (and did try).
Posted by Unknown at 22:00