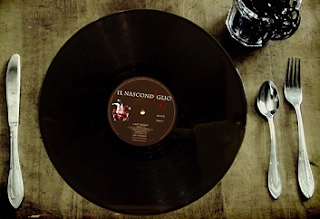 We have been FridayDateNight-ing for a few years now (wow!) and it's always been about our twin loves of music and food (and booze, woop!).  So tonight we shall have our food pay homage to music and our music pay homage to food.

What I'm thinking is eating some Black Eyed Peas and listening to Fish.  It's pretty sophisticated.

I have also introduced a Challenge.  If he didn't already find it complex enough to find food that fitted my ridiculous themes, I am going to give him a food item that he can try to get in to the evening's meal.  In however a tenuous way.  Maybe the more tenuous the better.  In the spirit of fairness, I will have him choose a band/artist and I will endeavour to find a song of theirs that fits the theme. 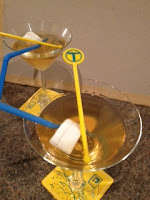 Challenge band is Telefon (you know that massively famous band).  The reason why it is the most obscure band ever is that I recently bought a British Telecom themed cocktail set that they had as a promotional item in the 80s.  Yes.  That's right.  So we wanted to make a cocktail tonight that we could use these incredible accompaniments with.  But, obviously, it being a themed night, it had to fit into our food vs music vibe.  Telefon have a song called The Birds.  It's the best I could do; you can eat a bird.  Whatever, leave me along.  CHALLENGE WON.  Ahem.

Food: Challenge food is anchovies.  Let's see how he does! 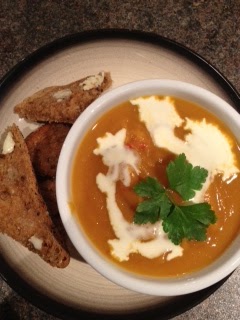 Wow, getting four bands into one starter, very impressive!  He might be lying about the pumpkin since it looked a bit more like a butternut squash, but, as yet, no one has named their band after this innocuous vegetable and become mega famous.  They should.

This is a sidedish he is improvising into a soup.  It has red onion, 'pumpkin', garlic, chilli and anchovies.  DING DING DING.  CHALLENGE WON.

Now how does it taste?

It's a really complex and awesome soup.  The anchovies in the background add a slight depth, the chillis add a nice heat.  Lovely texture.  The multigrain bread with unsalted French butter was a fab addition.  This dish may have been sarcastically thrown together to fit my incessantly ridiculous themes, but this is a definite win and needs a revisit.  Particularly good in the Autumn I would say. 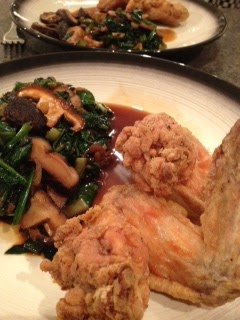 I love this man.  He doesn't remember that a) it's a Friday and b) he's knackered from a week and a day of working and he does these wonderfully ambitious creations.  And they are around stupid themes.  He is chopping, slicing, mincing and looking concentratedly at recipes.  What a guy.  Why he doesn't make it easier on himself, I don't know.  But then, I would be the same.  The one time I've been allowed to reverse roles I went all out making a pineapple upside down cake.  Oh and that black forest gateaux.  Okay, I get his vibe.  But still, it's making me tired (and guilty) to watch him beavering away!

Salt and pepper wings are a success, definitely worth another go.  The stirfry is zingy and full of vitamins.  I can't finish mine but think it would be awesome on a bit of ciabatta or brushetta bread.  Success!