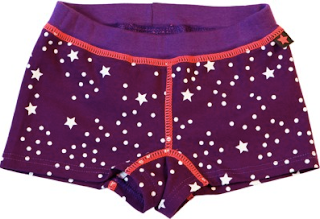 This week's theme was easy as we decided it during last week's FDN.  Then again, we do that all the time; come up with the PERFECT theme we should do, knock back a celebratory drink to toast it, and (obvs) totally forget it.

When listening to new songs, he will nod his head a little, and say either "hmmm, they're a bit like early Genesis" or "hmmm, they're a bit like Deep Purple".  For every band ever.  Well, early Genesis I know (and judge harshly), Deep Purple not so much.  So when he said Gotthard were a bit like Deep Purple (see if you agree here), I thought ENOUGH, let's listen to these buggers.  And, as if the artists had named their band so I could have a food theme too, there was an opportunity for lots of purple food.

Because we're both doing a load of driving to get to our jobs this week, we're sharing the food part.  Plus, how hard is it for me to slap a playlist of purpleness together? 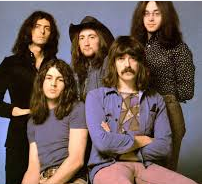 Well, of course, some Deep Purple.  But also, well, you can guess: Purple Rain, Purple Haze and some other shiz. 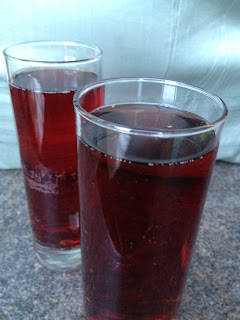 I bought him some Vimto, which was only available in sugar free, to challenge him to make a purple cocktail.  I sipped this drink and I did indeed make a purple scream.  I don't think a fruit flavoured, saccarin-heavy soft drink is the way to go as an ingredient in anything.

I had also bought him some prune juice with the same challenge, except, turns out I'm the only person that thinks prune juice might be purple.  It's brown.  It makes a foul looking cocktail.  He made a Pruneaux, of which prune and sherry are major components.  It looked horrible and it tasted horrible.

Tonight is the night of bad tasting cocktails.  As I sip my Purple Scream, whilst my face contorts in horror with a glint of a hopeful maybe-he-will-make-me-something-else-if-I-look-cute look, I try to get into Deep Purple.  Highway Star is not helping me enjoy life.  Then Hush comes on and I think, oooo, Kula Shaker did this.  Which is far better.  Heh.  I don't think I am going to be a Deep Purple convert. 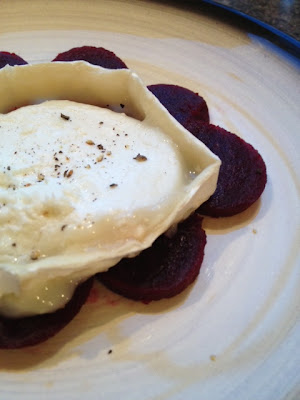 For purple, I looked up beetrooty starters, but I got a bit bored, saw goat's cheese and fancied that.  Honestly, how lazy a starter is this?  Sliced beetroot, arranged in circle, slapped baked goat's cheese on top, bit of pepper.  But was nice.  I think the beetroot should have been warmed through too.  Definitely worth a revisit, totally cute as canapés I think: mini cup cake tray, filo, beetroot, goat's cheese.

I don't know whether it's because I am a bit drunker, but I am now digging the Deep Purple vibe.  Really juicy and 80s.  Some of their songs now even go somewhere and have coherent structure.  Crazy.  My Woman From Tokyooooooooooo.

He has been 'lumbered' with the rejects from the purple cocktail fiasco.  If I'm going to have a hangover, I want it to be from drinks I like.  He has no such ridiculous standards and so he has four drinks in front of him.  Oh, he is gonna hurt tomorrow. 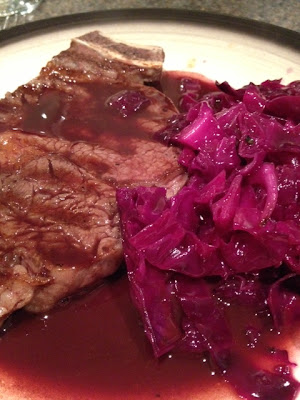 Steak with a red wine sauce and red cabbage

By 'red', obviously these chefs are mad, these are purple.  Burgundy at a stretch.

He is making this recipe up, and probably more so for 'having' to drink the reject cocktails.  Steak (which I have asked for rare and he will ignore me: it's like a tradition), with a red onion, red wine, port and beef stock sauce (with lots of butter).  There's some red cabbage happening.  He is walking around in the sort of happy strange daze one has if one has been travelling to Cambridge and back all week (200 miles a day) and knows he doesn't have to do it tomorrow.  The sort of walking slumber of the knowledge of an enormous lie in.

Tomorrow is going to be great.  I am intending a luxury sausage baguette brunch with oodles of ketchup, then an Ethiopian late lunch at RISC before a music festival in Reading of local bands in venues about the town.  Awesome. 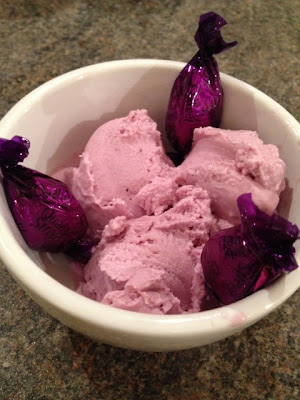 Yeah, this sounds way fancy.  But really it's some Yeo Valley yoghurt into the ice cream maker.  By far the best way to have yoghurt, which is an odd substance in its natural state (I think, at least).

To accompany this, I have added the one thing that has dominated my head space on this theme.  The Purple One.  Ya know, out of Quality Street.  So yeah, I had to buy a whole sodding box to fit this theme.

Yeah, so I was at the tills this evening with my basket of items (the starter and dessert and my prune juice and Vimto) and this guy says I should go ahead of his laden trolley.  And I don't really like it when guys are chivalrous and put themselves out, because I feel awkward, and I appreciated his kindness but I wasn't in a mega rush, but gawd he insisted and insisted.  Sigh.  Anywho, then he watches me put my items on the conveyer, and, well, frankly, they're weird aren't they?  So I say, "yeah, I'm doing a purple theme tonight...", he looks at me blankly, like that's a totally crazy thing to do, so I add, "what's the theme of your shopping?".  He looks bewildered, because I am being mad.  I don't think he had a theme.  Can you imagine!  Just buying things to your own whims and tastes on a Friday?!  Insane!