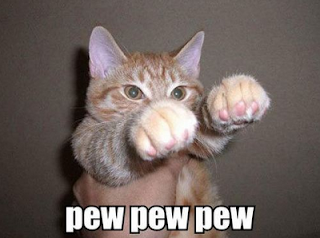 Tonight has the theme of random.

He decided to just be influenced by whatever recipes call to him.  He googled "amazing things to cook" or somesuch, and trawled until he was inspired.

I am being very organised in my randomness.  I have a D20 (20 sided dice to you normal people) and I am going to count to that number I roll on the recipe text, look that word up on Spotify, and then choose that number song in the list.  Yes, random.  Yes, organised randomness.

This week has felt random.  It started of a bit strangely, but by today it's been quite nice.  Some week's evolve and wind all around.


Music: Spotify playlist.  It's random and good.  Weirdly the Rizzle Kick's "When I was a Youngster" came up twice in two separate random keywords.  Playlist has from ABBA to Bon Jovi to The Maccabees.  It's a fun little list.  A lot of things that are new to us, Ben Howard turns up twice.  Who the heck is he?  Turns out we find him a bit dull and generic.  A poor man's David Gray.  Anyway, whatever, maybe he paid a crowd of people to listen to his tunes on Spotify to bump them up the popularity ratings.  Meow. 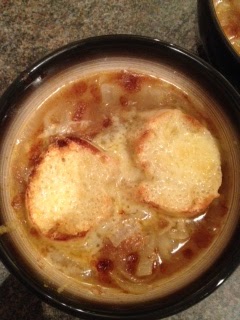 This caught his eye because he hasn't made this before and would totally order this in a restaurant.  The recipe (from which I have extracted my musical keywords for the first part of the evening) is quite evangelistic and I was keen to try.

The "lots of stale bread thrown in" part of the recipe, we didn't dig.  The onions, which he had sauteed for a good 45 minutes weren't squishy enough (yes, that's a technical term) and he would use smaller, more flavoursome options.  He proudly tells me how he will improve on it next time.  To which I much look forward to. 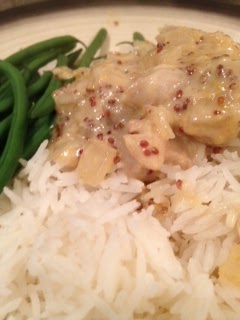 He chose this as he liked the idea of the honey, mustard, cream and pork.  Right.

It was quite nice, he thinks he would revisit.  I am unsure, it's a bit of a rainy evening meal, rather than for a special event such as a FridayDateNight.

But this is the joy of random, you might find great things, or not great.  Not too bad after all.
Posted by Unknown at 22:00