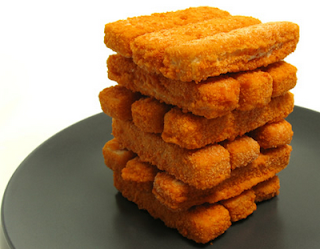 Tonight we're going to go for a theme of making over an original and (hopefully) making it better.

On the music front this means covers of originals which have maybe improved on the original artists' and on food, for some insane reason, we are making over the fish finger sandwich.  Which I don't think I have ever actually had.


Music: Spotify playlist.  Using a cracked.com post for inspiration, then this and then veering off into our own ideas.  We start with the Shatner version of Common People (by Pulp), which I have recently come to mega love. 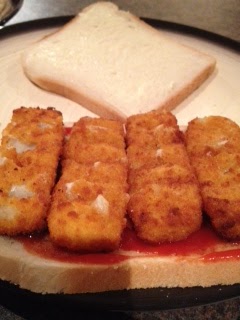 The fish-fingers in the cardboard box are, still as were in 1985, orange crumbed.  It makes me feel nostalgic.  However... I do not remember them being so very sparse on the fish.  The packaging promises such luxurious slabs of fish!

Back being a kid, fish-fingers were a quite usual dinner, for everyone.  A couple of fingers with some spaghetti hoops - perfect after a day of running around a playground.

As a grown up, this was not quite the same treat.  There seemed more crumb than fish, in fact it felt like just eating some panko breadcrumbs).  And it really needed the ketchup to lift it. 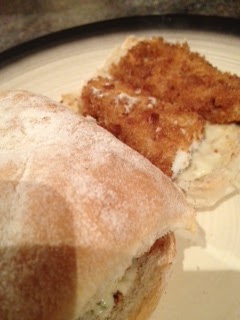 Haddock goujons on an artisan roll with tartar sauce

The fish goujons (for yes, one calls them goujons as everything sounds better food wise in French) were great.  We bought some haddock from The Smelly Alley Fish Company, a local fishmongers who are so friendly and a joy to buy from.

A quick bit of flour and then crumbs (we always have some we've whizzed up in the food processor shoved at the back of the freezer).

The roll was a bit blah, and, whilst I liked the tartar, I think it needed ketchup.