Tonight's theme was inspired by my friend Stella, who treated herself to Jelly & Ice cream this week to help her get over a twisted ankle.  Best medication ever.

She suggested this theme, and I thought YES just based on the jelly and ice cream.  It then struck me that children don't tend to have formal dinner parties with three courses (weird, right?!) so let's see what ingenuity he can come up with.

Stella is someone I know originally from a messageboard, and, when you meet people on the net you make up a picture of them.  I thought she would have funky blonde spiked hair - I dunno why - and IRL she has flowing brunette locks.  Shows what I know.  Thanks Stells, this one's for "yuo". 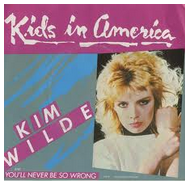 Music: Spotify playlist.  I didn't fancy an evening of hokey cokey and Disney music, so I have gone down the road of music that was around when we were kids.

Since he's a '67 baby and I'm '76 childhood pretty much means a couple of decades of the Seventies and Eighties.  I have made very little effort and have just thrown all those tunes from albums such as "100 70s song".  I know, you're welcome.  To randomise the order I am playing them in alphabetical order, which put Nena and her Red Balloons next to Johnny Cash.  Just like in real life. What children's event has any currency without the ubiquitous crisp?  My favoured snack is Chipsticks.    I know, it should be Tyrell's Sundried Tomato and Courgette flavour, right?  It ain't.  I can eat several packets of these in the mood and loved them when I was a kid.

Do you remember at parties, you'd have crisps and so on served in cute paper bowls.  Well, I mean, you still do.  Mad innit, do kids appreciate crisps in a bowl rather than a packet?  Nooooo.

And do you remember getting a party bag to take away at the end of party that had birthday cake, toys and sweets in it?  I want to return that to adult parties!  It was awesome! 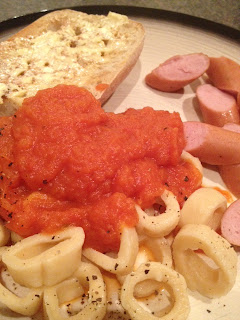 Spaghetti Hoops on Toast with Hotdogs

You're thinking "eh?", but he is making a version that is oh but how!

So you wouldn't have this at a children's party, because, well, they aren't usually sit down affairs, heh.  But this is so a meal kid's would nom on.

Our version is homemade pasta hoops (Italy is aghast at this abomination), the lurid orange sauce made orange with the use of butternut squash (Italy raises an eyebrow).  Served with buttered toasted ciabatta (Italy nods in approval).

He is serving white wine with this dish, as he thinks it would complement it best.  The children would love this Chardonnay, which is smooth and slightly nutty ;-)

I don't remember the last time I had this meal, and it's real nurturing 'everything is gonna be alright' fare.  I have a fondness for it even more after the Life on Mars pilot, when the Gene Genie said, in probably the best intro to a character ever, ever, "I'm Gene Hunt, your DCI, it's 1973, almost dinnertime... I'm havin' 'oops."  That man is so swoon.  Not that I would so cliche go for the bad boy.  Pah.  Dammit.

Hoops were created through the exotic medium of homemade pasta, flattened into sheets, wrapped around a olive oil laden wooden spoon handle and sliced into 'oops.  Gene Hunt would be horrified. 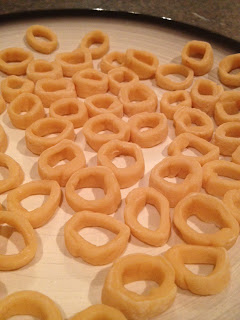 He tasted the sauce and thought it was utterly dull.  I said, well, shove in some chillis, he nodded wisely.  This may no longer be a children friendly dish...

The poncy overpriced Frankfurters have, and I quote, "natural casing" and are "Beechwood smoked".  Looking at the ingredients it seems to have the same sorta stuff as the usual ones, but they do have cardamom and lovage.  Yes, freakin' lovage!  The natural casings are "sheep casings", but I do not know what that means, how are they invisible??  And, I don't know what the usual casings are, but I feel a bit nervous.  But, well, not enough to remember when I next have one, of course...

Verdict is that the hoops hold more sauce, which is good, he wants to have a do-over and make them a little thinner.  I thought it was a lovely dish! 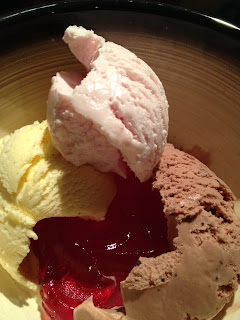 The classic, children only dessert.  Whilst traditionally vanilla and strawberry jelly, my lovely hubby has decided to fulfill my childhood dreams of Neapolitan, which was a tub of bright red strawberry, yellow vanilla and chocolate ice cream in rows.  They probably still do it, but this is for kids and there's no way I would be allowed to purchase it.  He has been all poncy and bought three separate ice cream tubs of the flavours so he could ensure we got fabulous quality.  He's so sweet.  He has also set the raspberry jelly (my fave) in a teddy bear mould.  Which I am not sure why I have. 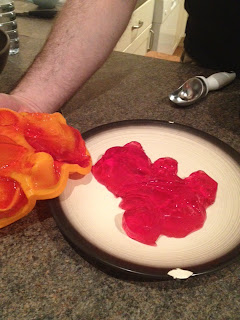 An alternative dessert would have been Angel Delight.  I miss that crap!

The tunes have been great fun; like those decades were just so much energetic cheery fun.  I sorta think they were.