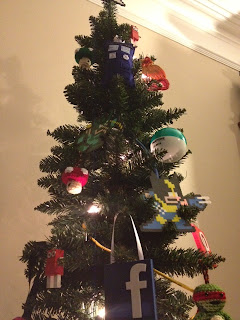 This year's theme for Christmas is Geekery.  We have had a year of lots of geeky things with me becoming oh so techie with my studying as well as some fabulous shows.

Tonight is a wonderful celebration of the food and music of the world of geek.  I couldn't choose a sensible three courses, there's so much inspiration out there and mad thoughts of my own.  So there's sort of endless courses.  It's also our fake Christmas Eve tonight (we are away for real Christmas) so eating and drinking and relaxing will be very high up the agenda for days.  Yippee!

That's our Christmas tree in the picture.  It's very geeky.  It has a tardis plushie, some iPhone ornaments (you can see the Facebook one, there's also Pinterest, Twitter, Google+ and a cute Instagram one).  A family of robots. A teenage mutant ninga turtle (crocheted) and some Mario mushrooms.  A felt stuffed pacman chases some ghosts around the bottom of the tree; the minx.  A lego bauble.  A pantone bauble.  And some comic characters (Wolverine pictured) including the Green Arrow who I keep calling the Green Lantern as they're the 'same thing' because it's very funny to annoy my hubbie.

My favourite is the most obscure: a mini version of Jayne's hat from Firefly. 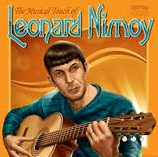 Starting with the double geekdom that is Leonard Nimoy singing Bilbo Baggins.  How did that situation ever occur?  The video is apparently horrifying.  I can't look.

He has added a country song by the lovely and ever geeky Felicia Day, a musical number by Neil Patrick Harris (NPH to his fans).  Then some Robert Downey Jnr (he is not as good as he thinks) and John Barrowman who sings the gayest tunes, and well.

Now a bit of Zooey Deshanel (who was in the Hitchhiker film and (yet another) gay crush).  And then Jack Black who is like a geek hero?  Then some Weezer and Busted - a bit faux geeky I think, but I think their thang.

Well, the geekiest cocktail of them all just has to be a Pan Galactic Gargle Blaster from Hitchhikers' Guide to the Universe.  In the book this drink is said to be like "having your brains smashed out by a slice of lemon, wrapped 'round a large gold brick".  How lovely!

There are a large amount of recipes for this cocktail on the Internet.  After all, the original description in the books contains items not obtainable on Earth, such as Fallian marsh gas.  Well, as far as I know anyway...  His quest was to find the most 'authentic'.  And, I am hoping, most delicious.

He said there were so many, that without tasting them or having a recommendation he was having a nightmare trying to decide.  So he decided to go with what he thought might be the most realistic; a crossover from the ingredients in the book and what we can do here on Terra.  The link is worth a read, there's a whole story to how this needs to be made!

How does it taste?  OMG alcoholic.  He thinks it's surprisingly pleasant considering what's in it.  We quickly realise we can't really finish it, it makes me have a hangover to even sniff it! 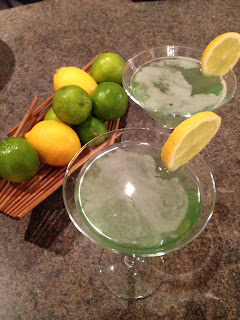 He styled the cocktail with an 80s lemon slice (when the books first came out) and they look much more arty and nice looking than they may actually be ;-)

Six seasons lovingly watched and re-watched of Lost, and the more geeky food items are the Dharma Initiative and their iconicly branded food drops on the island.  I have mocked up Dharma cans before and even an Apollo chocolate bar in the past.  This one is a little more creative and obscure...

The Dharma guys liked to do a touch of animal behaviour testing on Polar Bears (amongst other things).  Using these biscuits as the reward.

To go with these biscuits, and because I didn't want to make them sweet or fishy, I have made them plain and served with a lovely smoked salmon fish pate.  The Polar Bears would love it! 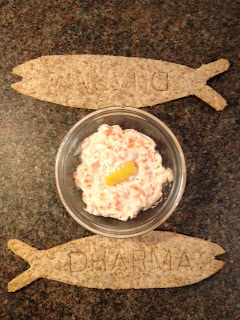 I was pleased to be able to use some lettering tricks from a Dunelm Mill purchase.  The biscuits were a bit dull, but I really think that's a good thing.  If the biscuit is so awesome it overpowers the item that's topping it, well, that's just wrong.  The original wanted seeds and I would put those in next time, definitely worth trying again.  The recipe is a Hugh Fearnley-Whatsit one, and I would like to try the other savoury biscuits he describes. 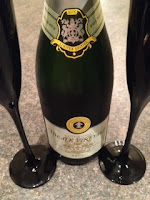 There is no episode of Hustle where they are not drinking champagne to celebrate, commiserate or con people (or the hapless Eddie the bartender).  We have champagne a go-go in our fridge (it being Christmas) and nice to break out the Theale Vineyard version.  It's astonishing our teensy village has a vineyard and makes such a good drink, but they do, and we are celebrating the lack of apocalypse today.

I have only just discovered this show (which I know is not even on anymore, not that I have got to the end of all the seasons yet) and I love this show.  LOVE.  It's always uplifting, getting one over on someone that's an idiot.

I also adore Ash "Three Socks" Morgan and would just love to take off that third sock.  Ahem.

The current iteration of Doctor Who has a particular interest in this combo.  The Internet suggests switching the custard idea for hollandaise.  But I like to be authentic and think it's important to try it the real way!

...but having hollandaise on stand by, just in case our favourite Gallifreyan has different tastebuds... 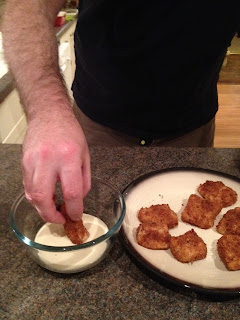 So it isn't anything like as bad as one might imagine.  Having homemade fishfingers and posh custard doubtless helps, but, hmmm, it's...  hmmm.... I dunno.  Let me have another one.  Hmmm, I don't dislike it exactly.  I am not sure I would actively have it again, but it's quite interesting.  So much so we don't bother with the backup hollandaise.  He really quite likes it, a bit too much!  Stop taking my pieces...

Settlers of Catan is a board game, the board of which is put together by hexagonal pieces - meaning each game is different.  The pieces have resources on them: sheep, wood, brick, wheat and ore.

Inspired by a full Catan pizza, I wanted to do just the individual pieces.  I would love to redo this and make a whole proper pizza made up of mini pizzas.  I used flatbread and used scissors to cut out the hexagons.  Perfect.  Then:


Oh and roads are made or strips of red and green chillies, heh. 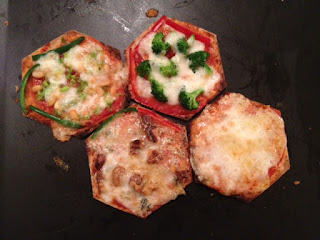 Covered with mozzarella, it's not entirely clear what everything is without explanation, but hey.  These were really nice, would be cool as appetisers for a party.  The cheddar and coconut combo was really good.  I even think more coconut and shove some chillies on them too.  Absolutely should revisit.

This innocuous foodstuff was the main plot of a mafia-esque episode of Community - definitely one of our favourite shows.  Geeky and surreal, it's a must watch.  In this episode, the canteen keeps running out of this very popular item, but it turns out they are being given out via the back door in exchange for favours.  This premise begins the mafia style vibe to the episode.

So, for us, this is just making some chicken goujons with a lovely dip of ketchup. 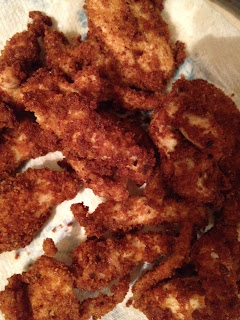 I really loved them (he thought they were dull), I thought that it's a simple and nice foodstuff.  His crumb mixture included breadcrumbs, smoked paprika, cayenne pepper and garlic salt.  What's not to love?

In the last episode of season one, the Evil Queen, Regina, decides to kill off Emma by cooking one of her poison apples into a turnover.

Very weirdly, as we were unpacking four million limes into our fruit bowl last night, there was a solitary red apple in the bowl.  Neither of us can remember buying it.  Clearly put there by a malevolent being, so, well, I baked it into a turnover. 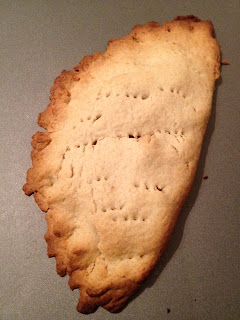 Yeah, we didn't die.  Quite a quick little way to make a pseudo apple pie, must remember this next Autumn.  I can wander into the garden, grab and apple from the tree and whisk it into this dessert.  Like some sort of perfect existence.

This was a delightful song by the Chef from South Park.  Laden with innuendo, natch, I always wondered if this could be something I could make.

I have made this recipe up and been utterly lazy too.  Sort of going for a cake pop idea, I mashed up store bought chocolate sponge cake, chocolate frosting and a slug of rum.  Rolled into balls, topped with a little sea salt and shoved in the fridge.

Served along with Picard's favourite drink from the replicator: Earl Grey, hot.  I always thought, surely the machine could be programmed so that the default for a tea beverage was hot, so that it didn't need to be specified.  You don't hear Deanna Troi asking for a Chocolate Fudge Sundae, cold - now do you? 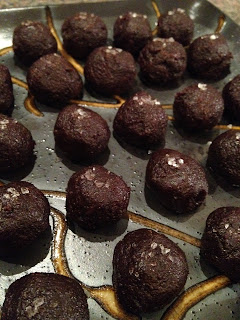 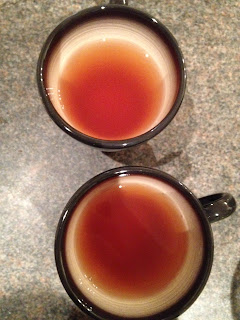 He liked the balls and particularly the salty aspect.  The rum taste sort of disappeared, but they were still a nice petit four with the tea.  Hurrah.

It was real hard to choose what to make this evening.  I found this awesome site of meals Steve Jobs or Charles Babbage might like - from ice cream to take away menus (oh, Linus).  I also have wanted to make the Red Dwarf Triple Fried Egg Chilli Chutney sandwich since forever.  Maybe this needs a revisit sometime... but not for any Solyent Green.
Posted by Unknown at 18:58