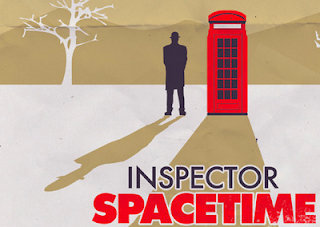 For those of you who haven't watched Community, you should, it's awesome.  As part of its many pop culture references it has a show within the show called Inspector Spacetime - a wonderful spoof of Doctor Who.

Tonight we are going to take a trip with the Inspector, and the question isn't where... it's when.

Food and music will be from across time and space.  Space may be a bit limited to the planet I am most familiar with though, but that's what the good Doctor went for too.

Once again she is cooking and I'm doing the music and filling in some blanks in the blog.

Music: Spotify playlist. E: "This is sort of music from all time and space. Well from the late 60's to date. Most importantly they all contain the words Time or Space preferably in a science fiction context. The real winners have both. I've gone for a very random spread because recently we've had too much of one thing, last week's football list being a good (bad) example. There are real pop classics, some nice shouty metal and some very random choices." 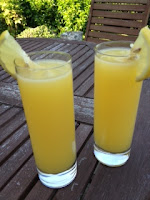 Cocktail: Inspector Spacetime doesn't have a sonic screwdriver, he has an optic pocketknife.  This cocktail is a twist on an existing sonic screwdriver cocktail.  So the Optic Pocketknife is Vodka, orange, lemon juice and soda. It's a lighter classic Screwdriver, more grown up, lighter, less sweet.  Very good and worth a revisit. 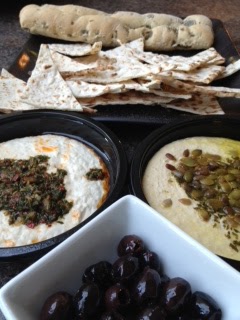 Selection of Dishes from Ancient Egypt

Here we have some very early food, from around 2300BC.  However, Sainsbury's has clearly had a bit of a run on this genre (where the hell were all the vine leaves and so on?!) so we have cannellini bean houmous and butterbean dip.

The pitta flatbread and foccacia are from 4000BC, my bad.

However this is a perfect starter to be eating in the garden with the heat of the day fading away; a splendid cocktail and trivia from the day. 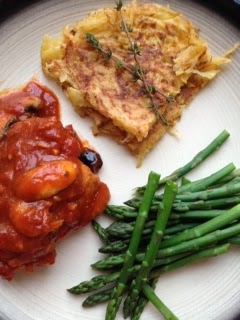 I've heard of this but never had it.  Apparently named after a battle in 1800 that has passed me by.  Napoleon was successful in defeating some Austrians.  Yay? It turns out that the battle was in Northern Italy - explains the tomatoey nature of the dish. There is much discussion on how nice this is for such a relatively simple dish. She says I have no idea how complex it is.

As soon as I tell him the dish he says "Red Dwarf?" and this is geekdom, it is indeed mentioned by the Cat in the show (too slow, Chicken Marengo, too slow for this cat).

This fine dish is served with rosti and asparagus. Excellent choice by Napoleon's chef (ahem).

It seems that Napoleon's favourite wine which the Inspector has purloined for us is a Malbec from Cahors. Who knew? Well, we're enjoying it too. 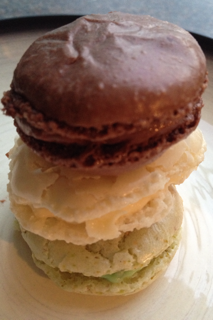 This looked insanely hard to make, all delicate and fancy, so obviously that's the fun challenge!  By fun I mean horribly frustrating and far too patient for my level of freneticism.

E: "I fear she's suffered too long for this dish and it's painful to hear her early descriptions of horror and war. She's just finishing them off to the strains of Jamiroquai. She's just snuck them into the fridge and they look awesome!

Well, they were good. They might not have looked like the picture on the recipe but they tasted amazing. It's hard to choose a favourite but possibly the pistachio."