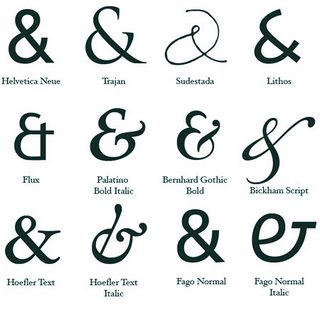 Sometimes we allow gatecrashers for our FridayDateNight - and tonight we have five!

Fonts are awesome - people who don't get fonts don't realise how much is altered by an inappropriate font (think CERN and their announcement in comic sans).  It's the voice of text.  I find typography a fascinating subject and yes, yes, I may be one of a select few who own font top trumps, a font game for the iPhone and the Helvetica film.

Combining fonts with food and music was challenging, but eventually really fun once I got my pun on.  I may have gone overboard because this is such an interesting subject for me, but I do have some guests to persuade so it's all for the greater good.


Music: Spotify playlist.  Quite a surprising mix - yes, there are bands called Verdana, Baskerville, Arial...  Sometimes my random themes become a bit genre specific, but there is a lot going on here and some good tunes.  Apart from the awful Comic Sans song (although what do you expect for such a horrifying font).

Cocktail: A selection here for my wonderful guests; Andy, Piia, Jon, Avril and Ben.  Utterly surprised that a Gill Sans cocktail already exists, as well as Futura.  OCR A Extended gave the opportunity for him to create with the ingredients being the intiials: Orange, Cranberry and Rum.  But it wasn't that nice as it turned out, though it did spark conversation about the font, which apparently is used on cheque books.  I know, my parties are a riot. 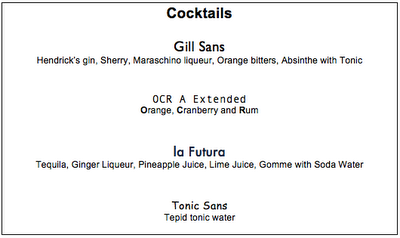 Now it would be insane to also use the font theme as a fancy dress idea, but the wonderful Avril brought not one, but three.  What is she here? 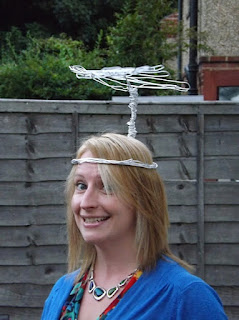 Arial of course!  She also brought some gills for Gill Sans and a "100 years" celebration for the font Century.  Piia trying out being Arial for herself: 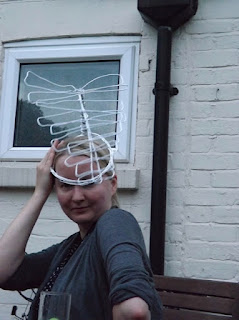 I managed to persuade Avril to leave this wonderful prop as it will definitely come in useful for, erm, something?

We don't usually even sit at the dinner table for FridayDateNight, but I decorated the table with scattered letters (which turned out to be comic sans, what is going on with the world?!), and place names on mini chalkboards.  Chalkboard, get it?  No... it's a Mac font, don't worry, I'll get my coat... 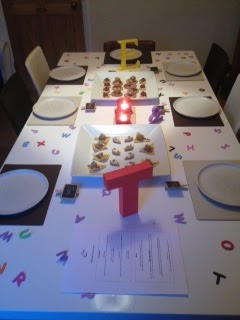 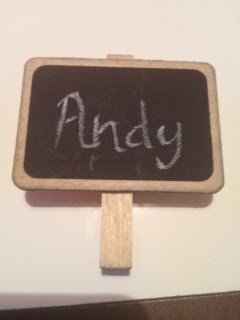 I never worked out some wonderful font pun for these, but I really loved making them.  The amount of time to think up and create them being insanely more than the two seconds it takes to eat the morsel.  Maybe I enjoyed the process - I haven't been working so have been using this dinner party to keep myself very occupied and not give myself time to reflect and bemoan that I just don't know where on earth to take my career next.  Whine, whine, whine.  Speaking of which, our lovely guests brought lots of fabulous white wine which was much enjoyed! 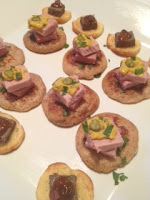 My amuse bouche on platter one:
* Toasted brioche topped with homemade lambs liver pate with whiskey, topped with Victorian chutney and a teensy square of red onion

* Handcarved cubes of Wiltshire ham, a soupcon of coursegrain mustard, toppped with Fortnum and Mason Piccallilli and a sliver of cornichon - all gingerly placed upon homemade blinis (for which I cannot take the credit, the amazing Piia made and brought these!) 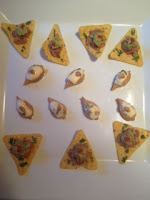 * Caramelised apple slice in the shape of a leaf (I don't know why, shush), with melted St Agur blue cheese and a little piece of walnut.  Apple was from our tree

And onto the meal proper... 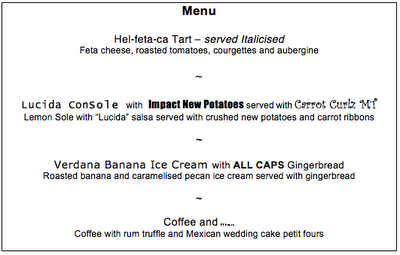 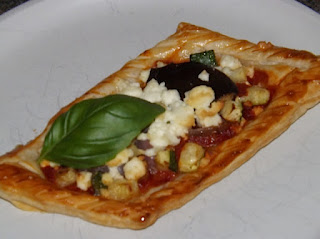 I know, what an amazing pun on the Helvetica font.  People fell about.

This was an awesome little starter, I will definitely do again.  Roasted aubergine with cubed courgette and baby tomatoes from our local farm shop topped with feta cheese in a puff pastry tart.  Simple but really nice.

If you thought you couldn't really talk about fonts for an evening, you'd be wrong.  We chatted away, delving into accents and then just general drunken rambling. 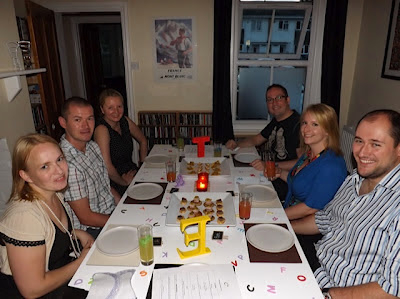 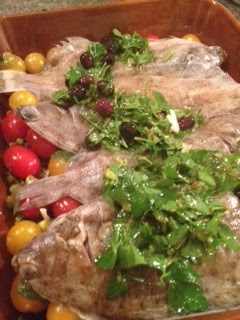 Bought these seven soles from the Smelly Alley Fish Company, is there a better name?  On reflection it wasn't really enough for a main, even served with my smashed up Anya potatoes.

The carrot strips were a total pain in the ass to make, I did find myself peeling a strip off the fifth carrot and thinking WHAT AM I DOING?! This thought could have led to my downing tools and giving up on such a ridiculous theme.  But I struggled through my existential crisis.  They did look pretty when tablebound. 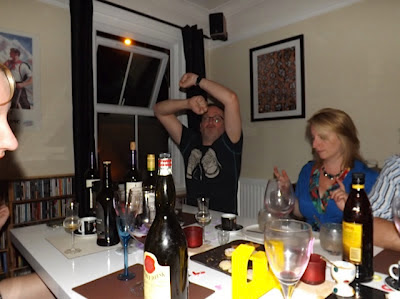 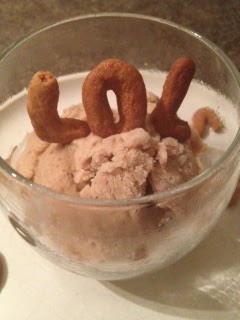 I followed a recipe for roasted banana ice cream (and improvised a bit at the end) but it really just didn't taste banana-ey enough.  But I must make more ice creams, they're fun to do.  The gingerbread I made a few days previously, lots of little letters to adorn the ice cream: LOL, WTF, ROFL, FFS and FTW.  Lots of gingerbread leftover so made some biscuits too.  I must bake more biscuits as well.

Coffee served with Petit Fours, Pt Fours, like 4 Pt, a tiny size of font.  If you don't get it, it's okay.

I made some rum truffles (sadly the recipe wasn't very good, so I will hunt more next time) and Mexican wedding cakes (again a different recipe than usual, still unsure as they were a bit savoury, for good or bad).  They are basically small shortbread-esque tasting morsels.

The drinking and, yes, tuneless singing, then continued on till 4am!  Rock and roll!  e plonked all the bottles of things that we seem to have been lumbered with at some point or another.  Some horrible Danish evil tasting thing actually going down well.  Ben deciding which horrible spirit to start with: 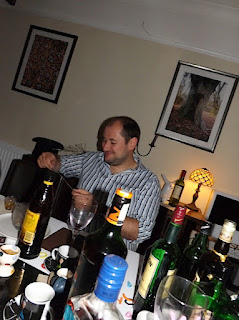 Fabulous evening - so pleased I can coax people to talk about fonts in exchange for food and booze.  Thank you so much to my lovely guests; Andy Smith, Piia and Jon and Avril and Ben.
Posted by Unknown at 04:43