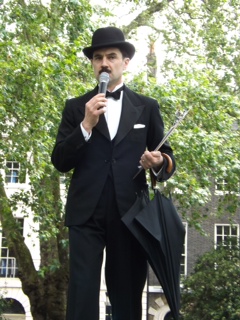 Are you a chap?  Or are you a lady with a parasol who swoons?  This week we will take a journey back to a better time.  An English time of chaps.

We attended the Chap Olympiad recently.  After a weekend of staying at the East India Club (ra!) and spending many hours pottering around Fortnums (double ra!), we went to the Sunday of this marvellous event.  In a private square (natch), we sampled Pimms and G&Ts (with a bite) whilst watching ridiculous games.

Tonight we will be harking back to that fun day, bringing some tunes together and nibbling on appropriate bits and pieces.  Pip pip.

We are shortly hoping to join the New Sheridan Club so that we can hang out with these awesome people born in the wrong decade.  It's also become very, very clear I need a wardrobe of beautiful 40s dresses. 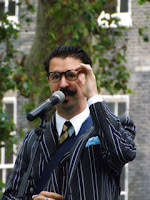 Music: Spotify playlist.  Some chap hop and electro swing in there for good measure.  There wasn't that much music at the Chap Olympiad, but this list wouldn't have been out of place.  Mr B the Gentleman Rhymer also played a set, and whilst one must choose a camp and choose a favourite chap hop artist between him and Professor Elemental, I did have my arm signed.  As one does.  And then not wash it throughly enough which entertained colleagues on the Monday.  I sure am weird. 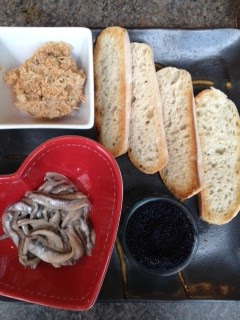 Potted crab, anchovies and caviar.  A chap likes the simple things, a little of that upon a bit of toasted bread.  Nothing to wipe from his cravat (and if there were, his manservant would attend to such detail). 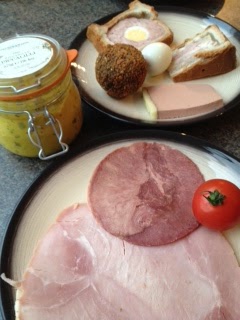 Whilst I have been sitting here blogging, sipping english 'champagne', talking nonsense (out of character), he has been preparing the dessert.  What a man (chap).  But now; the main.


Main course is foofery free, he researched Edwardian picnics and the Downton Abbey kitchen website (which was sadly lacking, which is a shame as we love that darn show).


Black pudding scotch egg: ahh he is disparaging of this Waitrose offering, he wonders if it would be good warm.  I quite liked it and generally these are not my kind of thing.


Breton Duck Mousse: personally I think this is a travesty as proper English chaps would be anti foreigners and certainly France.  However, it wasn't shabby.

Gala pie: very good, says he, common ingredients coming together and being all English.

Ox tongue: oh em gee, this is of a time.  He doesn't like the texture (it disturbs him), I think it doesn't really taste of much.  This is the taste of a time of rationing, but yet which some people (relatives) continued eating many, many years later.  I had a lot of corned beef sandwiches as a kid, which is really a war food.

Chicken and Ham pie: he had wanted Game pie, but thought this would do.  I say no.  It's pretty blah.


He also thought he couldn't go wrong as we had Fortnum & Mason Piccalilli to slather on which frankly is quite intense/amazing and makes anything taste good... or just overpowers it, but hey whatevs.


The other item that he added to the offering was a tomato.  Just a tomato, stalk and all, no imagination.  This is what the concept of salad was back in the 'old days', that I do remember myself.  And eggs, boiled eggs, just plain - knocking about in all sorts of things.  My Mum even had a hard boiled egg slicer to save her those urgent 8 seconds to slice an egg.  Slicing being very important.  Strange times.  Good times? 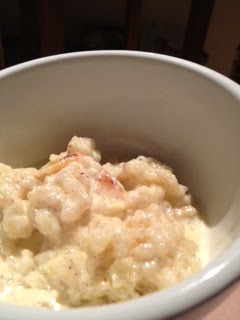 He says he is a bit scared of the calories of this dessert (he is such a girl).  He made a portion to serve to a house full of people, if the house were a mansion...


So, it was rich as anything.  Which was precisely the point.  Maybe he desires to die of a Porterhouse Blue (which is a stroke brought on by over indulgence).  Scullion would be proud.

And now some pics from the Chap Olympiad, beginning with the programme of events: 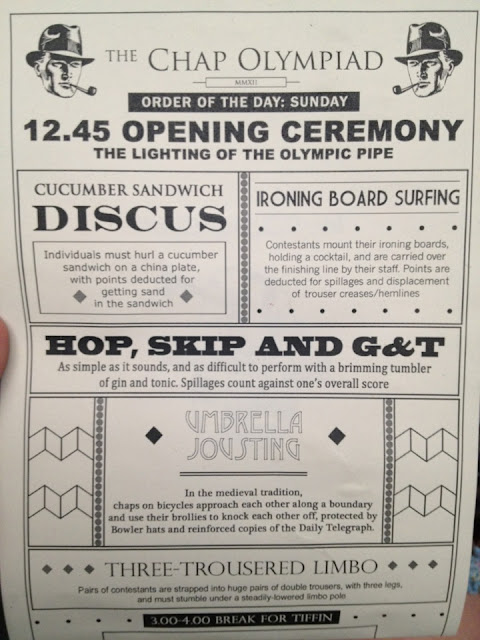 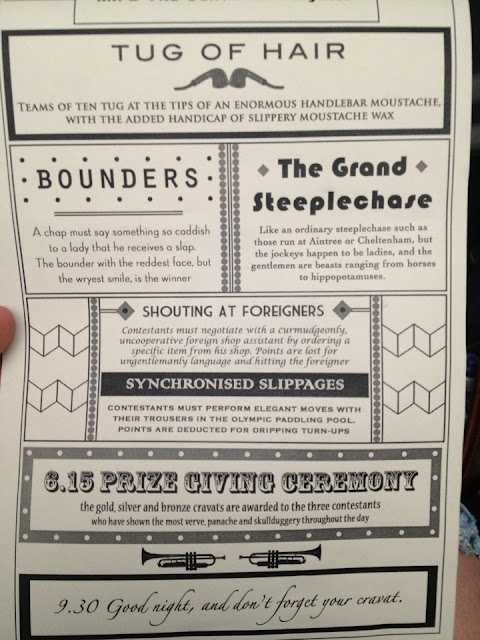 And so concludes our evening of Chappery.  Toodle pip! 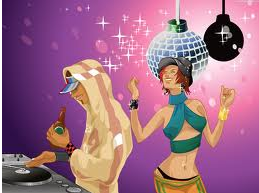 You do not talk about Music Club

In our new Facebook group "You do not talk about Music Club" (dammit, I broke the rule already) we thought we'd try out listening to an album each week - old school much?  Sixty or so suggestions later (!) and let's see what turns up.  This evening I am pulling the album for the week ahead out of a hat (top hat of course).


So, drum roll etc, the album is Queen's Night at the Opera.  Not really ever done Queen album wise so should be kinda cool.


We settle down with our dessert wine and notepads at the ready. He has listened to this album many times way back when (on vinyl, natch) and I have never listened to it.  So here were our thoughts. 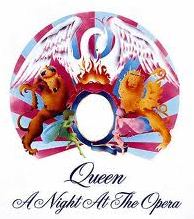 Queen - Night at the Opera

It's been so long since I listened to this album all the way through. It was never my favourite Queen LP but it does bring back so many memories of teenage years discovering music with my mates in our bedrooms.


I find this to be a very mixed album with very Queen tracks like Death on Two Legs or You're my Best Friend mixed with the very Jeeves and Wooster Seaside Rendezvous or Good Company mixed with the awesomely prog rock Prophet's Song and Bohemian Rhapsody.


I love Queen's harmonies, guitar sound and Freddie's voice, but I'm not sure this is my favourite album. Listening to it now I find the hit singles stand out so much they jar - perhaps because they are so well known and I've heard them so much. I'd forgotten how much I liked Seaside Rendezvous and as an entertaining album it still works for me. It's an incredible technical accomplishment with a very rich sound even today. However as a complete album it doesn't completely fit together. I give it three stars.

Death on Two Legs - technically brilliant, sounds like the standard song style is immediately thrown out. Such a strong singer. It's very musical, theatrical, sounds like a story


Lazing on a Sunday Afternoon - they're singing almost a bit sarcastically? Go one direction or another - it's all over the place! Wish I could hear the words, feel it would add something more?

You're My Best Friend - for me this is a song from Peter's Friend - loved this stupid shit British film. Had Stephen Fry and Emma Thomson ("fill me with your little babies"). Saw this at school. This is where music and personal past intersect and it makes you think of that time, and just that.


As part of an album, it's a bit like listening to some unknown eclectic songs and then in pops a single out of nowhere, disturbing the equilibrium.


'39 - reminds me of the Moody Blues, 60s pop. I would never guess this song was Queen in a million years, it's so odd, interesting, could be anyone. Really like, don't get me wrong


Sweet Lady - not loving this one so much, bit sort of easy going Rolling Stones type thing. I think, really weirdly, if I hadn't have known it was Queen, and was told it was someone super cool, like the freaking' Ramones or whatever, I would have liked it more. I don't know what that says of me.

Seaside Rendezvous - feeling a bit more exhausted and disinterested of their thing now. Not getting this. Who would like this? I don't hate it, I just feel like I am at a Benny Hill festival where everyone else is into it and I am just a bit stiff and confused.


The Prophet's Song - what's going on now? Now I feel like I am at a cult where everyone knows the words to some chant and I am mumbling and looking at my shoes. What is all this? Again, I don't hate it, I just feel like I didn't get the memo explaining what it's all about.


Just when I think the song is over it seems to get really self indulgent. On and on it goes. Does it get better, or go anywhere? Is there a theme? Sort of. But then it's sort of a story about a hero than is a bit two dimensional and you don't care if they live or die. Is the song done yet? How about now? No?


Love of my Life - immediately reminds me of Muse, which is mad, because surely it should be the other way around. But this came out in '75 a year before I was born. I liked what Muse did, with classical and good solid, coherent tracks. This isn't really anything like a Muse track, but it makes me appreciate the parallels. This song is sweet and I like it. Bit tame, but I am grateful of it after the previous one that made me feel demented and confuzzled.


Good Company - reminds me of weird Paul McCartney songs from the White Album. I like it. But not as part of this album, as something else.

Bohemian Rhapsody - I can't judge this as part of the album as my first real exposure to this was in Wayne's World. Which was awesome. This will always be sung in a car by Wayne and Garth (in the same way that Don't Stop Me Now will always be Sean of the Dead beating the landlord up). It's fascinating. I don't understand the lyrics, I don't know if I am meant to. The song is long and windy and I find that cool. It pulls you in and moves you to the next place, like a musical does.


God Save the Queen - okay… well, that's nice. Didn't the Beatles end similarly on Abbey Road with 'Her Majesty'? I dunno, I can't say it's derivative because it makes sense since they are a band called Queen.


I don't get this as an album. As an A to B. It darts all over the place and doesn't seem like a journey. Choose a thing: go with it. Be progressive, or be classical, or be banjo people, or embrace Mercury's voice. It's like having an ice cream and covering it with hundreds and thousands AND toffee sauce AND chocolate chips AND chopped dates covered in caviar. Choose one? Choose ONE!!


If this had been separated into three albums, each of which has more of a consistent theme, I would get it more. Clearly I shouldn't be their marketing person as this did good, but, still, seems mad...


I think this album is super interesting, not good or bad, just fascinating, it's a sort of mess and all eclectic and that. I would be up for listening to it again in a pot filled student room or, um, not sure where else is a good location? The 70s?