Awww I liked working for Vodafone, it was a fun time.  This week's FridayDateNight will be an homage to this telecomms giant.  You may think this isn't a romantic night in for a couple... but you'd be wrong.

Okay, you'd be right, but who says it's wrong to use a goodbye gesture to a contract as a basis for an evening of food and music.

Music: Spotify playlist.  I have no idea what on earth he could come up with 'Vodafone' as a theme for music.  But he is a smart cookie - he researched music that has been a theme for a Vodafone advert, all across the world.  Some tunes were mainstream and some were pretty cool.

Food: There is some strange creativity that I have employed to make a Vodafone themed meal.  Perhaps I am the first person to do such an insane thing, but hey. 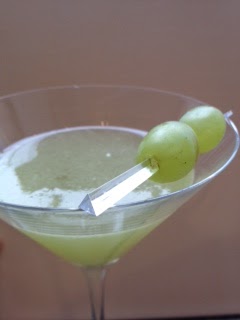 I didn't know much about good old Charles before my research, and his bio didn't say he loved gin and cranberries or anything that would have been very useful like that.  So I went on this, a quote the poet Thomas Carlyle said about him - that he looked like "a cross between a frog and a viper."  How rude is that?!  So my cocktail would be a cross between a Fat Frog cocktail and a Viper Venom cocktail.

Since the former is a combination of alcopops and the latter involves bourbon and rosewater it should have been utterly disgusting.  It wasn't, it was actually lovely.  So here's to you Charles. 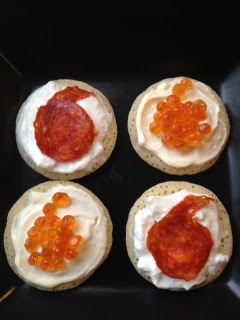 I wanted to use the logo for food design because it's so funky and clearly lends it self to such manipulation.

Blinis are perfect as the round circle base, but they're not white so needed a white covering and then a red apostrophe on top.  I decided to make two types:
They were pretty darn nice. 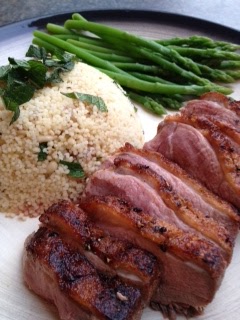 Pan-fried Duck with Fig and Mint Cous-cous and Asparagus

This is a bit twisted.  In the middle of the Vodafone campus is a duck pond... so what do I do?  Cook one.  Nom, nom, nom.  (Disclaimer: the duck is really from Waitrose, of course - it's one thing to steal post-it notes but stealing wildlife seems a little wrong).

The asparagus represents the reeds?  The cous-cous represents, ummm, nah, I just thought it would be a light accompaniment.

Duck is lovely, I should cook it more often - with just a bit of seasoning and gently frying - perfect. 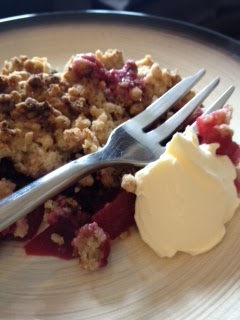 I was handed my bosses phone when I was at Vodafone to contact someone.  I had no clue how to operate it.  And I am, like, totes clever and that.  How hard is it to make something intuitive, eh?  Okay, pretty hard going by most of what is in the world.

The muesli in the crumble topping was a great addition, RIM should take note and stick oats all over their phones.
Posted by Unknown at 22:30