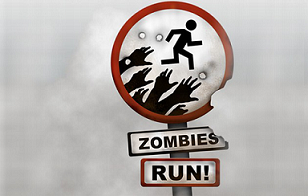 A marvellous phone app has come out where you can complement your runs with a zombie apocalypse.

Along with an immersive story narrated between your songs (and it is immersive, I did look right to see the abandoned hospital I was being told was there), in Zombies! Run! you pick up items as you run (to build up your camp and open more missions) and you are occasionally chased by zombies.  Yes, I have to actually speed up for a minute to outrun the buggers (it's tracked by GPS so it knows if you're dawdling!).

Tonight is an hommage to zombies.  God rest their long gone souls. 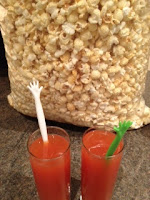 Music: Spotify playlist beginning with the Cranberries with Zombie
Food: Starting off with some chilli popcorn (the popcorn choice for zombies and nothing to do with the massive bag of chilli popcorn we were given as an awesome and weird present!), he mixes up a Zombie cocktail.  Not sure why we haven't made these before, they are pretty famous and have lovely rum in them.  I have had them in bars and so on, I guess they didn't make enough of an impression for a homemade request.

Aren't the stirrers in the drinks awesome?  Like the arm in the air out of a grave of a newly reanimated zombie. 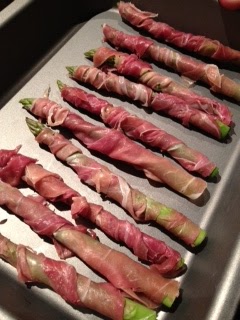 How on earth did he find a zombie and cut off all their fingers?  The man has talent.  The zombie is clearly decomposing with their green tinge.  The flesh hanging off looks delicious.

It's a simple, effective starter.  Good in a week where I need some constant clingy hugging, instead of watching him juggle an involved recipe.  Yeah, yeah, I'm lame. 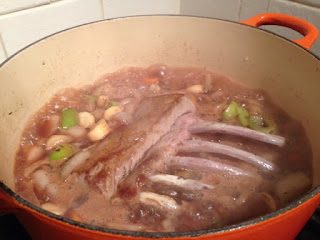 Not quite sure why you would eat a zombie; wouldn't it a) be rotting meat and b) infect you with zombieness?  Anyway, let's not split hairs, it was a stew with some ribs - all good.