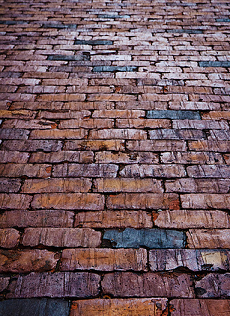 Not that I am obsessed with the past (our round up for 2011 last time) or future, but this week we're looking forward to the coming year.

Is everything going to get more gloomy and economically depressing?  Will things buck up?  It's fabulous to not have any idea what's going to happen.  Scary, sure, but fabulous.

On the food side, he could be inspired by destinations we are planning to go to, or events going on next year.  On the music side the plan is to look at what new music will be out there.


Music: Usually we'd have a Spotify playlist but these bands are too cool and unsigned.  We start with Rats on Rafts from the Louder than War blog of Top 50 new bands for 2012 which is a great blog.

Food: He has chosen to cover two things from 2012; one of which is the big event of 2012 (which will absolutely piss us off with its constant hype) the Olympics.  I know, I know, I should care, but I don't have that much interest in sport, have no chance of getting a ticket, and BIG things like this, I dunno, even Wembley freaks me out, so many people!  I think I may have issues.  Anywho.... Our big trip this coming year is Texas and I subscribed him to an awesome Texas cooking blog which he has used as inspiration.

We start off with a Texan Tea, which is basically a Long Island Iced Tea with bourbon, and the strains of Effluence in the background.  Like them.  Bit shoe gaze in places but seem fresh and energetic.  As I nod coolly along, he seems to be emptying bins and tidying.  It's a bit bizarre. 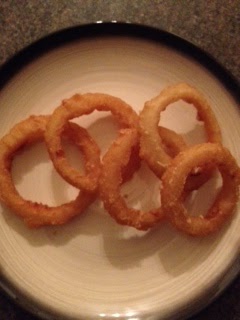 Har har har.  So this is just Waitrose beer battered onion rings, served with tomato ketchup of course.  Normally not something that floats our boat but quite fun.  Be cool to make these from scratch as they were nicer than I imagine onion rings to be.  More sort of pickled onion Monster Munch than day old Wetherspoon's anaemic limp version.

Listening to Elizabeth and the Catapult (good name) recommended by CBS to lookout for next year.  Quite like, but does seem like a bit like quite a few of the Amy Winehouse-esque soul gals.  He has made a Massacre for me and tricked me saying there was no Campari in it (one of the very, very few things I don't like).  However, it's good, and the Campari, just a teaspoon, really makes it.  Damn.

He is preparing the next course, which is from the Texan cooking website mentioned earlier.  I love her stuff, makes me realise I am an idiot having all these preconceptions about a food culture like Tex Mex.  Or not realising the differences to Mexican.  In a country where we have a shelving unit in supermarkets dedicated to El Paso, where it seems they have "made local" these cuisines, I think a Texan or Mexican would be very unimpressed by what is offered.  Like Italians looking at our crappy Vienettas.  I think that over time we, the consumer, will be more trusted to give something a go than need it dumbed down by a supplier.  Maybe. 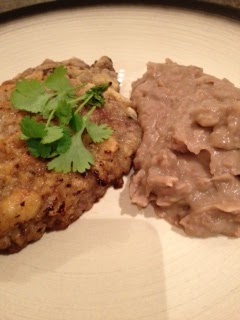 He is frying bacon just to get the bacon fat.  Wow.  He is now making, essentially, a roux, but with bacon fat as the fat element.

Viza are our favourite so far.  They supported the geezer who sings for System of a Down and there are some serious similarities and also loving their Russian vibe.  They are Serj and Gorgol Bordello mashed up.  Win.

The Cream gravy didn't make it.  It was too horrible (he corrects me to say "disgusting" and a tirade of bad words).  He is also disappointed with his beans; thinks they are too watery, but I think they are a good beginning.   He was happy enough with the meat.  It was supposed to be a cheap steak, he bought a topside joint (Freakin Prince Charles's Duchy I tell ya!), and egg and batter and fried.  He isn't that happy that it wasn't anything more than the sum of its ingredients.  I don't think I am an escalope/schnitzel fan.  The idea is to hide an inferior piece of meat in breadcrumbs and fat.  But I like the meat.  Hide an awesome piece of meat that way and I'm laughing! 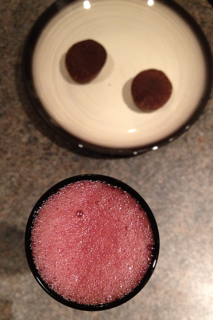 These were not meant to be a dessert for tonight.  We stole them from the packet for New Year's Eve.  Shhh.

Yes that is a sparkling red.  Weird eh, was good though.

Back on the tunes.  Even Ian thinks recommended band Optic with Echoes in a Solemn Chamber (oh yes) are too self indulgent for his prog rock fan boi ways.  And even I with my electronica lovin wants the singer to be very replaced for Winchester.  Both bands from Muse's forum (!) suggestions.

As we finish off our drinks we listen to a few more tunes, notably Giraffes? Giraffes!

I am weirded out that most songs this evening, from my search of "up and coming" and only looking for things posted in this year, are mostly Shoe Gaze.

Ian thinks that, essentially, Shoe Gaze bands are only ever up and coming, but never arrive.

To end off the evening we look at some blogs that predicted the up and coming bands for 2011 to see who made it.  We know Little Comets and Airship.  We is teh coolz.  We look through few more to pick up gems.  I love With That Knife, Ringo Deathstarr is kinda cool.  Miles Kane is awesome.  Fiction is interesting, would def go see IRL.  Two Wounded Birds sound like Californian surfin and they are from Margate!  He loves them.  Tarantino would too.  Dutch Uncles are fun.  He likes The Suns' surfing moody vibe.
Posted by Unknown at 19:36